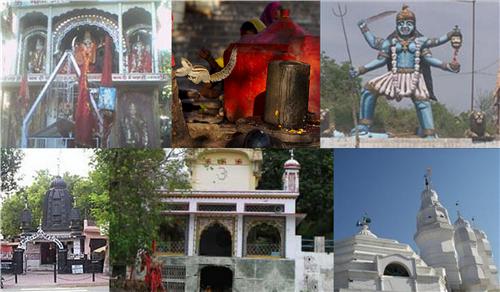 Pathankot can easily claim to be a city of temples. Many big and small places of worship are located in different parts of the city. Some of the temples are centuries old while some are built quite recently. People from far and near throng these temples sometimes to ask for boons and sometimes just for the love of God.

Following is a short description of some important temples within the town:

Ashapurni Mandir is an old temple dedicated to Mother Goddess. It is located close to the city center at Pathankot on Dalhousie Road. It is a very popular temple and the deity is held in high esteem by people of the region. In local languages Asha means expectation and Purni is one who fulfils such an expectation. It is believed that if a devotee sincerely asks for something, Mother always grants it; hence the name Ashapurni.

Regular worship of the deity is carried on in Ashapurni temple throughout the years. Kanya Puja is also performed every day. Meals are also offered to the devotees free of charge. Navratra is a special occasion here and devotees throng this temple from far and wide during that period.

Ashapurni Temple is easy to reach. It is located at a distance of 1.5 Km from Maharana Pratap Inter State Bus Terminal, 2 km from Pathankot Railway Station and 3.5 Km from Chakki Bank Railway Station. Incidentally, the locals often refer to Maharana Paratp Bus Terminal as Pathankot Bus Stand. Visitors can avail local transport such as buses, taxis and auto-rickshaws to visit the temple from any of these places.

This ancient temple, dedicated to Lord Shani, is located on Dalhousie Road near State Bank of Patiala. It is set in a beautiful surrounding against the backdrop of Shiwalik Mountains. It is situated at a distance of 3 Km from Pathankot Bus Stand and 3.5 Km from Pathankot Railway Station. However, the distance from Chaki Bank Railway Station is 5 Km. Devotees believe that a visit to the temple can free them from all kinds of difficulties and troubles. Consequently, people from far and near come to pay their obeisance here.

Lakshmi Narayan temple dedicated to Lord Vishnu and Mother Lakshmi is located on T-2 Road in the Ranjit Sagar Dam Colony. The temple is very close to Singh Sabha Gurdwara. It is located at a distance of 16 Km from the bus stand, 16.2 Km from the Pathankot Railway Station and 18 Km from C. B Railway Station.

Inside the temple there are the idols of Lord Vishnu and Goddess Lakshmi placed side by on the altar.  In the courtyard one can see a huge statue of Lord Hanuman. Statues of Lord Vishnu, Mata Lakshmi and Hanumanji can also be seen at the entrance of the temple. There is also a well maintained garden with a huge palm tree located outside the temple.

As the name suggests, this too is an ancient temple dedicated to Mother Kali. There is a small idol of Goddess Kali placed in this temple. In spite of that, it is one of the most popular spiritual destinations in the town and visitors throng this temple all day long. Dignitaries to the town often start their tour with a visit to this temple.

The Kali Temple is located on Dalhousie Road at a distance of 2 Km from Pathankot Railway Station and 3 Km from Chaki Bank Railway Station. Just as any other temples in the town, Pracheen Kali Mata Temple too is reachable through local transport system.

Renuka Mandir is one of the oldest shrines in Pathankot. It is more than 650 years old. It is located on B P Shashtri Mission Road off Dalhousie Road. The temple is dedicated to Devi Renuka, the mother of Sage Parashuram. It is located at a distance of 2.5 Km from the bus stand and 3 Km from Pathankot railway station.

This is another temple dedicated to Mother Goddess. It is located close to Mirpur Shaidi Park at a distance of 3 Km from Maharana Pratap Inter State Bus Terminal, 2 Km from Pathankot Railway Station and 1 Km from Chaki Bank Railway Station.

The Durga temple is located on Dhagu Road close to Senior Secondary School. One can avail local transport such as auto-rickshaws and buses to reach this temple.

There is another Durga Mata Mandir located at a distance of 9 Km from Pathankot city. The place, known as Damtal, lies across river Chakki. The temple is dedicated to Mother Durga, who the Hindus believe to be the epitome of universal energy.

Other Temples in and around Pathankot

Other than the above mentioned temples, there are Shree Shiv Nag Temple, Rama Temple, Hanuman Temple within the city limit. Besides, there are some famous temples such as Bagwali Mandir, Nagni Mandir, Kathgarh Shiva Mandir located few kilo meters away from the city. A day’s trip to the last mentioned temples is said to be a wonderful experience for the devotees.