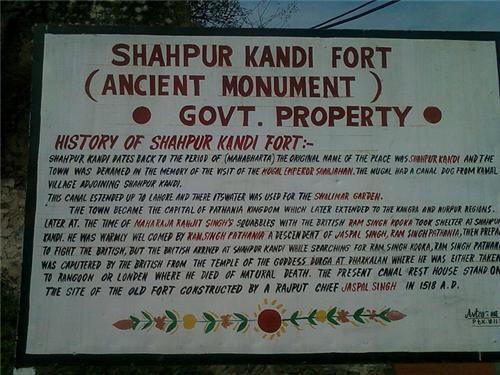 Close to the India-Pakistan border on the Madhopr Road is a village called Shahpur. There on the left bank of River Ravi one can find a beautiful fort built by Pathania ruler Jaspal Singh in the early 16th century. Although the fort has now been transformed into a guest house it still possesses a charm of its own. Indeed, if your dream is to spend few days among the historical grandeur, Shahpur Kandi Fort is the ideal place. Since the fort is located at a distance of 17.5 Km from Pathankot, one can also go there for a day’s trip.

For centuries Pathankot had been the seat of the Pathania Kings of Punjab. It is believed that a branch of Chandrabangshi Tomar Rajputs led by Rana Jethpal came to this region from Delhi more than 1000 years ago to carve out a kingdom of their own. They first settled down in the Jalandhar Doab; later they conquered a fort called Bhet and finally came to Pathankot, then known as Paithan. We do not exactly know where they lived before they built the fort at Shahpur Kandi, but we do know that once they conquered Paithan they began to be known as Pathania kings. 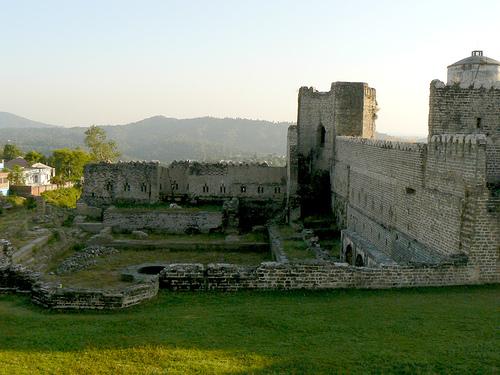 As we have already said, the Shahpur Kandi Fort was built by King Jaspal Singh Pathania in the year of 1505. Indeed, the site must have been chosen with care. Located at the foothills of Shiwalik Mountains on the left bank of River Ravi, this fort not only offered a safe haven for the kings, but also helped them to retain their control over their entire kingdom. At that time it not only comprised of the Pathankot region, but also Nurpur and Kangra. Although the capital was later shifted to Nurpur (now in Himachal Pradesh), its importance was never diminished.

Anybody who is interested in the history of this region must have heard of Ram Singh Pathania.. It was from this fort that he fought most of his battles. In fact, Shahpur Kandi Fort was the last refuge of this brave Rajput prince.

By then, the capital had shifted to Nurpur. Since the true heir to the throne was a minor, Ram Singh carried on the kingly duties on his behalf. However, the British had other designs and wanted somebody else to sit on the throne. Ram Singh rebelled against the British when in 1848 AD the representative of the state was insulted by them. Several wars broke out between the two sides, but Ram Singh Pathania could not be subdued. He even recaptured the Shahpur Kandi Fort from the British and made sure that the British did not get any foothold here.

Unfortunately, a Brahmin told the British where and when the brave Rajput could be found unarmed and alone for petty gains. Finally Ram Singh was captured while offering prayers. He was tried and deported to Rangoon. He died there on 11th November, 1856. However, he is still remembered by the people here through different ballads and fairs.

Places of Tourist Interest in and around the Fort 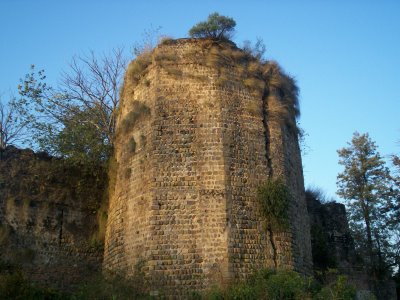 Although the Shahpur Kandi Fort lay abundant for many years, the intricate designs on the walls are yet visible. The architecture of this fort is also very commendable. Moreover, nestled among the green hills and overlooking River Ravi the fort also offers spectacular view. Close to the fort is located an ancient mosque as well as some Muslim tombs. Madhopur located few kilometers away is also a good place to visit.

Moreover, while travelling from Pathankot to Shahpur one can find a series of caves nestled among the hills. It is said that the Pandava brothers spent a major part of their forest life in these caves. However, one cannot verify the authenticity of such claim because no historical or archeological evidence is available to sustain it. Yet, the folklores and beliefs should not be ignored simply because of that. A belief that has stood the test of time must have some truth in it.

How to reach Shahpur Kandi Fort

As we have already said, the fort is located on Madhopur Road at a distance of 17.5 Km from Pathankot. The fort is easily reachable via local transport such as buses, taxis and auto rickshaws from Pathankot. Bus services to Shahpur are also available from all major towns of this area.

For more detailed information abou Shah Kandi, one can also call at the following numbers: