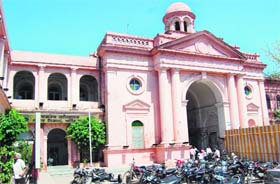 Just as any other local self governmental agencies, the main objective of Pathankot Municipal Corporation is to work for the welfare of the people. They intend to provide every civic amenity prescribed by the law of the land to the people of Pathankot so that they can lead a healthy and prosperous life. Besides that, providing best of facilities in the fields of health, education, sports, culture, entertainment etc are also within their perspective.

Let us therefore see what their plans are in the above mentioned fields:

The Corporation has laid special emphasis on the health and hygiene of the people of this city and hence cleaning of open drains and sewers gets the topmost priority.  Since contamination of water is the source of many diseases, providing adequate drinking water to the citizens of this town is also an important agenda for them.  Moreover, better management of garbage and removal of stray cattle from the city roads are also within their lens. Since dairies pose health hazard, they also intend to phase them out from the city.

Pathankot Municipal Corporation is very keen that all the citizens should at least get the basic education. To achieve such an end, they have opened up number of schools, which provide free education to the children of this town. They also intend to upgrade the libraries that fall under their jurisdiction.

Pathankot Municipal Corporation is very serious about promotion of culture in this city. To achieve such an end they have plans to promote classical languages such as Sanskrit and Urdu along with dance, music and drama.  In addition, they have plans to construct an open-air theatre at Shimla Pahari. Moreover they intend to renovate the Municipal Corporation Swimming Pool and construct a multi facility sports stadium.

Maintenance of roads under its jurisdiction is the duty of Pathankot Municipal Corporation. Work to this end is being carried on all over the city. However, they do not intend to stop there, but have plans to make the traffic smoother by construction of flyovers and realignment of routes.

To achieve such an end, the Municipal Corporation has decided to:

Other than the above, they also have plans to provide better lighting system for Pathankot roads. Once all these projects are complete, travelling through the city will be much easier.

Pathankot Municipal Corporation intends to take part in all round progress of the city. Construction of air-conditioned markets, food courts, corporate offices are also within their agenda. More importantly, they intend to provide better facilities at the Cremation Grounds. Up gradation of the Fire Brigade is also within their agenda.  Moreover, the Corporation is persistently trying to educate the citizens against different social ills such as drug addiction and dowry. They are also trying to educate the people on the ill effects of female foeticide and neglect of parents.

Explore more about Administration in Pathankot