One Day Trip From Pathankot 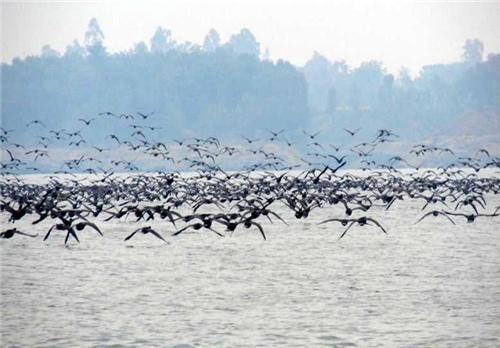 Pathankot, located in the foothills of the Kangra-Dalhousie mountain range, is itself a major tourist destination. On top of that, there are quite a few places around the town that is worth seeing. For example, a day’s trip to Ranjit Sagar Dam, located at a distance of 17 km from the city, is not only a refreshing experience, but it also enriches the mind, especially during the winter season when migratory birds comes here to nest. We will now talk about few more places that can merit a day’s trip from Pathankot in Punjab.

Maharana Pratap Sagar, also known as the Pong Dam Lake, is another such place. It is located at a distance of 55.6 Km from Pathankot on river Beas in the Kangra District of Himachal Pradesh. For its rich bio diversity and sustainable use of wetland, the lake has been declared a Ramsar Wetland Site.

Maharan Pratap Sagar is home to 220 species of birds belonging to 54 families.  Apart from these two-winged creatures, the lake is also the natural habitat for 27 species and sub species of fishes. Different species of animals such as oriental small clawed otters, barking deer, sambers, wild boars and leopards are also found in the jungle in the periphery of the lake.

When and how to visit Maharana Pratap Sagar

The best time to visit Maharana Pratap Sagar is from November to March. From Pathankot, the lake is accessible both by road and railways. However, if you decide on the later course, you must take the Kangra Valley Railway that runs between Pathankot and Joginder Nagar and get down at Nagrota Surian.  From there, visitors are required to take up local transport to reach Maharan Pratap Sagar.  One may also get down at Jawanwala Shahr Rail Way Station and proceed from there.

The ancient Kathgarh temple is also located in the Kangra District of Himachal Pradesh. It is situated at a distance of 25 Km from Pathankot at the confluence of River Beas and River Choch. It houses two lingams, one representing Lord Shiva and other representing Devi Parvati. An interesting fact about this temple is that the distance between the two lingams reduces on Nag Panchami and increases during Shivratri. 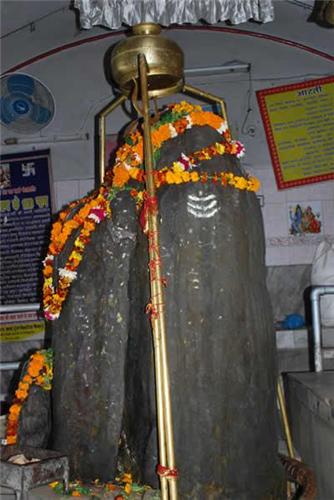 Free langur as well other facilities such as toilet, parking and canteen is available at the temple complex and hence visitors will not have to face any difficulty.

When and how to visit Kathgarh from Pathankot

Devotees visit the shrine throughout the year. However, Monday, is the best day to visit this Shiva Temple. A fair is held every Monday at the temple complex. To reach the temple from Pathankot, one must first reach Indora. Kathgarh is located at a distance of six kilometers from here.

Nurpur fort was built by the Pathania kings in the 10th century AD. Although it has been destroyed first by the British rulers and then by an earthquake, the ruins still evoke a strong sentiment among the visitors. The Brij Raj Swami Temple, built in the 16th century, is a popular temple here. 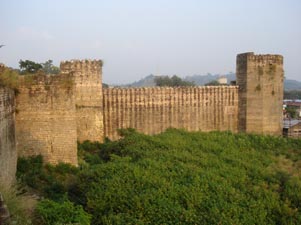 Nagni Mata Temple, located at a distance of 6 Km, from this fort is also another popular temple of this region.  The town is also famous for its silk mills and hence if you are in a mood for shopping, you can also go about it.

How to reach Nurpur from Pathankot

Nurpur is located at a distance of 30.8 Km from Pathankot. It is accessible through NH 154. Unless the traffic is unexpectedly heavy, it takes around half an hour to reach Nurpur from Pathankot. One can also take Kangra Valley Railway from Pathnkot and get down at Nurpur Road. Local transport is available from there. 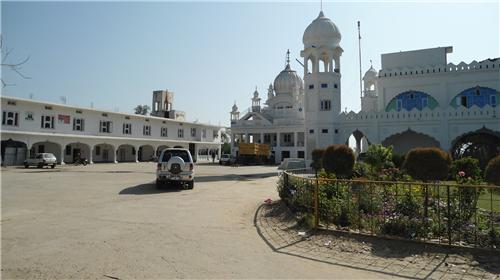 Gurudaspur, located at a distance of 40 Km from Pathankot was founded in the seventeenth century by Guriyaji Mahant and since then, the city has seen many historical events taking place within its peripheri. Gurdas Nangal, located at a distance of 7 Km from Gurdaspur is the place where Banda Bahadur fought with Mughals. Bole Wala Bagh, situated behind the Government Collage is another place every Indian must salute for the soldiers who revolted against the British rule in 1857 were hanged in this very garden.

How to reach Gurudaspur from Pathankot

From Pathankot, Gurudaspur can be accessed both by train and roadways. Trains run regularly between these two cities. To access Gurudaspur through road, it is better to take NH 1A; then NH 25 and lastly NH 54.

Therefore, we see that Pathankot has something for everybody. Whatever is your inclination, Pathankot will never disappoint you.