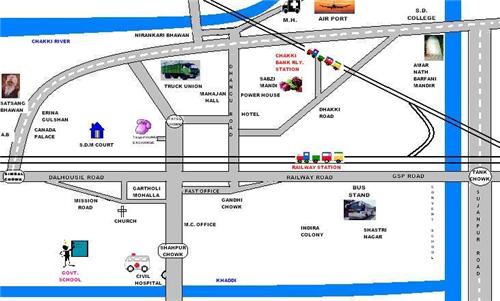 Pathankot, located on the bank of River Chakki, is unique in many ways. The city, spread over an area of 700 Sq Km, is divided into two distinct parts. The older part of city has his origin in the pre British period.  It has grown up haphazardly. Its narrow winding roads, flanked on both sides by houses that seem to vie with each other for more space, make it distinctly different from the newly developed areas with planned outlay.

Difference between Old and New Pathankot

To be sure, the different between the two localities is marked as much by landscape as by the lifestyle of the people residing there. The older part of the town is very congested. It is characterized by a maze of by-lanes flanked by old style houses on both sides. A few old havelis can still be seen here. On the other hand, the newer part of the town is much more spacious. It has wider roads bordered by modern edifices on both sides. The stores too are much more sophisticated. In short, it has all the amenities any modern city is expected to have.

At the same time, the community feeling that can be witnessed in the old town is missing in the newly developed part. People here lead a more individualistic life. There is no place for tradition or community in their busy life.  Unlike in old part, life here is a rat-race.

The Old City of Pathankot

The old city, in spite of its congested alleys, has an attraction of its own. The old style houses, made with thin tile like bricks, present a charming façade. Most of them have stores or workshops in their ground floor. Everything from shawls to utensils is manufactured in those workshops. This part of the city also houses many kite makers and kite flying is a favorite pastime for the boys here. Apart from the general ambience, ancient temples and functioning wells makes this part of the town an important destination for the tourists.

Indeed, to learn about the life of the people in this old part of the city, one must visit Andoor Bazaar; this is where Ashapurni Mata Temple is located. It is evident from the narrow crisscrossing alleys that the area has come up on its own without any planning. The roads here hardly ever get any direct sunshine, yet life is as colorful as it can be.

If you ever visit this old part of the town, do not forget to taste freshly baked tanduri and chick pea curries from road side stalls. At least, do remember to sample a glass of lassi from the shops at Meat Market Gali.

The New City of Pathankot

The recently developed part of the town spreads from Patel Chowk to Bypass Road. This part has wider roads, which are lined by many private residence as well as commercial establishments. Many modern colonies have also come up here. Indira Colony, Shastri Nagar etc are some of them.  There is also an army and air force base located at Mamoon.

Mamoon Chowk is one of the most highly developed area of the city and houses many renowned shops, banks and government offices. Some other important chowks in this area are Balmiki Chowk, Patel Chowk, Simbal Chowk, Gandhi Chowk, Shahpur Chowk etc.

Important Roads in the City

Railway Road, Dhangu Road, Gurudaspur Road, and Dalhousie Road are the four major thoroughfares in this city. Among them, the Railway Road is the most congested while Gurudaspur Road has the least number of people living on it. Beside these four, the town also has three other important roads and they are Saili Road, Dhakki Road and Mission Road. In fact, all these seven roads have many important government offices, banks and ATMs located on them. Many renowned hotels and restaurants too are located on them. In all, these roads form the hub all activities in Pathankot.