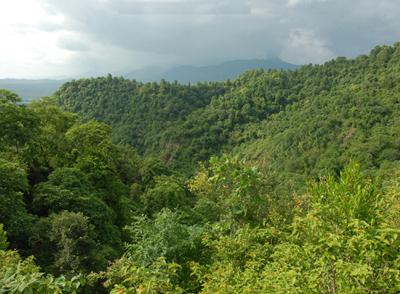 Geographically, Pathankot lies in the foothills of Kangra and Dalhousie Range of Shiwalik Mountains. Because it connects Himachal Pradesh and Jammu-Kashmir with rest of India, the area is often referred as the Cock’s Neck.

For centuries, the city has been gateway to North Indian Sates such as Jammu-Kashmir and Himachal Pradesh.  In fact, it is the meeting place of three important states in North India, namely Punjab, Himachal Pradesh and Jammu-Kashmir. Therefore, the geographical importance of the area can never be overestimated. Its proximity to the international border with Pakistan makes it all the more significant.

Let us first look at the states that border Pathankot. The Narowal District of Pakistani Punjab is located to the west of Pathankot District. To its north lies the Kathua district of Jammu and Kashmir. In the east we find Chamba as well as Kangra District of Himachal Pradesh and finally, to its south lies the Hoshiyarpur and also the Gurudaspur district of Punjab. Incidentally, Pathankot district was initially a part of Gurudaspur District; it was created out of the said district as late as 27th July, 2011. 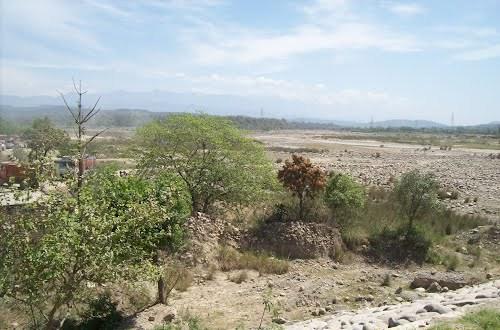 In general, the land here is undulating. The soil, which has mostly been brought down by the hills by its river system is rather coarse and stony. However, it is more so nearer to the hills and as we travel downstream, we find it to be less so.

In fact, the physical features of the Pathankot district are very much influenced by the numerous seasonal streams that crisscross the region. Locally these streams are known as chos or chaos. However, the two mighty rivers, Ravi and Beas, which run westward through the district also play their part in the geography of the region.

The Small Seasonal Streams in Pathankot

Let us next examine these chos more closely. These seasonal streams originate in the Shiwalik Range and generally run for ten to fifteen kilometers before they disappear as inland waterways.  However, these chos are not natural streams, but a byproduct of rampant deforestation that have taken place here.

Indeed, once upon a time the area was densely forested; but large tracts of land have been cleared of trees to supply timer to the numerous saw mills of this area. This has resulted in formation of numerous chos. Let us next examine how such deforestation had played havoc with the geography of this region:


However, the picture has now changed dramatically. Thanks to superior technology available now, these chos have not only been tamed, but its water is now channelized for more prudent use. They now play a constructive part in the life of the people here.

River System in the District 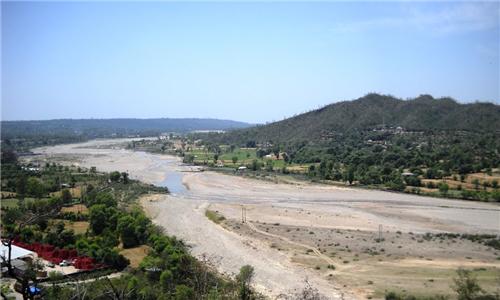 Other than these chos, the district is watered by two major rivers of the area, namely Ravi and Beas. Among the two, the Beas rises from the Beas Lake, located in the southern face of Rothang Pass in Himachal Pradesh. It enters the state of Punjab near Hoshiyarpur and flows first in the northern direction to create a boundary between Hoshiyarpur and Kangra. It then takes a southward turn to separate Pathankot from Hoshiyarpur. Finally, it meets River Sutlej in Kapurthala.

River Ravi on the other hand originates in the Chama district of Himachal Pradesh. It enters Punjab near Madhopur, which is located at a distance of 9.5 km from Pathankot city. The Ranjit Sagar Dam located on this river is one of the biggest hydroelectric projects in Punjab.

River Chakki that flows by Pathankot city is another important river of this region. This snow-fed river is a tributary of River Beas and meets the same near Pathankot. It originates in the Dhauladhar Mountains in Himachal Pradesh. Since it is a snow fed river, unlike the chos, it has water all year round. However, during the monsoon, the quantity of water flow increases drastically. 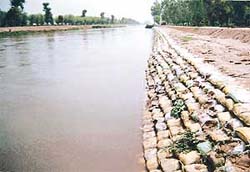 The Upper Bari Canal system, which originates at Madhopur is an important irrigation canal of this area. It diversifies the water of River Ravi to irrigate cultivable land in the three districts of Pathankot, Gurudaspur and Amritsar. This canal system, like many others in Punjab was constructed in the pre-independence period. In fact, as per available record, the Upper Bari Doab Canal was completed in the year of 1879.

Pathankot has five distinct seasons. They are as follows:


Summer: Summer season lasts from mid may to mid June. The temperature generally remains between 35 and 45 degree Celsius but may rise up to 48 degree Celsius.

Autumn: Autumn generally lasts from mid September to mid November. During this period the temperature generally remains between 16 and 27 degree Celsius, but may rise up to thirty.

Winter: Winter generally lasts from mid November to March. The average temperature during this period can be anything between zero to fifteen degree centigrade. Sometime the city has persistent rainfal from westerly direction during this season.

Spring: Spring is the most enjoyable season of the year. The temperature varies between 9 and 18 degree centigrade. March and April are the two months, which comprises the season.